Here’s a cool probability problem the start of which is accessible to middle and high school students with careful reasoning.  It was posted by Alexander Bogomolny on Cut the Knot a week ago. I offer what I think is a cool extension of the problem following the initial credits.

The next day Mike Lawler tweeted another phenomenal video solution worked out with his boys during Family Math.

Mike’s videos show his boys thinking through simpler discrete cases of the problem and their eventual case-by-case solution to the nxnxn question.  The last video on the page gives a lovely alternative solution completely bypassing the case-by-case analyses.  This is also “Solution 1” on Alexander’s page.

When I first encountered the problem, I wanted to think about it before reading any solutions.  As with Mike’s boys, I was surprised early on when the probability for a 2x2x2 cube was

and the probability for a 3x3x3 cube was

.  That was far too pretty to be a coincidence.  My solution exactly mirrored the nxnxn case-by-case analysis in Mike’s videos:  the probability of rolling a painted red face up from a randomly selected smaller cube is

Surely something this simple and clean could be generalized.  Since a cube can be considered a “3-dimensional square”, I re-phrased Alexander’s question into two dimensions.  The trickier part was thinking what it would mean to “roll” a 2-dimensional shape.

unit squares.  The latter are thoroughly mixed up and put into a bag.  One small square is withdrawn at random from the bag and spun on a flat surface.  What is the probability that the spinner stops with a red side facing you?

Shown below is a 4×4 square, but in all sizes of 2-dimensional squares, there are three possible types in the bag:  those with 2, 1, or 0 sides painted.

I solved my first variation case by case.  In any nxn square,

After reading Mike’s and Alexander’s posts, I saw a much easier approach.

The dimensions of the “square” don’t seem to matter!

Oliver Wendell Holmes noted, “A mind that is stretched by a new experience can never go back to its old dimensions.”  The math after this point has the potential to stretch…

I now wondered whether this was a general property.

, independent of the dimensions occupied by the cube.

Going beyond the experiences of typical middle or high school students, I calculated this probability for a 4-dimensional hypercube (a tesseract). 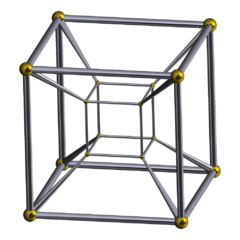 The probability is independent of dimension!

I hope you can now return to something close to your old dimensions.

This entry was posted in problem-solving and tagged Cut the Knot, geometry, hypercube, probability, tesseract. Bookmark the permalink.