Extending Multiplication to Algebra and Calculus

In my earlier post on a multiplication trick for young learners, I forgot to include a higher level connection, so I’ll do that here.

LEVEL 6:  Advanced Algebra or Calculus.
Part of what makes this problem work out so nicely is that the sums of the numbers involved in the lists are constant, an omnipresent property of position-symmetric terms from any arithmetic sequence.  That is, given any arithmetic sequence of sufficient length (e.g., {1, 2, 3, 4, 5, 6, 7, 8}), the first and last terms (1 & 8) will always have the same sum as the terms just inside those (2 & 7), the next terms inside (3 & 6), and so forth until you run out of terms.  This property can be proved for any arithmetic sequence with introductory algebra.

Here’s the advanced math connection.  Given all pairs of numbers which add to some constant sum, k, what is the relationship between the pair of these numbers whose product is maximum?

Let the two numbers be X and Y where

.  We want to find the maximum of the product

.  If you recognize this last expression as a quadratic function,

, then you can use the location of the vertex of a parabola (algebra) or some calculus (find the zero of

) to see that the maximum of f occurs at

Complicated math aside, this means that when you have a list of pairs of numbers that all add to the same constant, the pair with the biggest product is always the pair of numbers closest in proximity to each other.  In the context of this problem, this explains why the inner products of any arithmetic sequence are always larger than the products of the first and last terms.

A few months ago, I noted the following problem on a separate ‘blog for a textbook a colleague and I created to fill a need at our school.

Assuming the pattern continues forever, what is the value of

As you know, I encourage my students to be creative and solve problems in ways that make the most sense to them.  Following are three different approaches my students used when presented with this problem.  All three are essentially identical invocations of the problem’s self-similarity, but I liked the differences in how they approached the problem.

STOP!!!
SOLUTION ALERT!!
DO NOT READ ANY FURTHER IF YOU WANT TO SOLVE THESE PROBLEMS ON YOUR OWN.

Approach 1:
Notice that other than the outermost square root and addition, the entire problem is repeated inside the problem.  Therefore, if

The value of X is obviously positive, so

, the golden ratio!  How’s that for an unexpected surprise?!

Approach 2:
Two students thought in terms of sequences.  Each assumed a first term of 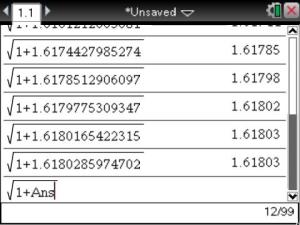 Recognizing the decimal equivalent of

, the first student concluded that the iterated surd appeared to be the golden ratio, but said in a class discussion the following day that while he had compelling evidence for an answer, he knew he hadn’t proven his solution.

Approach 3:
My second student who thought of a sequence approach reached the

statement and realized that if she was able to iterate forever and this problem actually had an answer, then there would be a point where

where L is the limit of the iteration.  At this point, she wrote

and proceeded as in Approach 1 to get

Some readers might argue that Approaches 1 and 3 really aren’t distinct, but I maintain that the students who used Approach 1 (the clear majority) were thinking purely algebraically and took advantage of the problem’s self-similarity, while the girl who used Approach 3 was thinking numerically and found her answer using limits.

.  At first, this problem looks very different from the one discussed above, but its closed form delighted some (and disturbed others!)  with its connection.  I hope you enjoy!

Additional musings on the problem of Area 10 Squares:

Thanks, again to Dave Gale‘s inspirations and comments on my initial post. For some initial clarifications, what I was asking in Question 3 was whether these square areas ultimately can all be found after a certain undetermined point, thereby creating a largest area that could not be drawn on a square grid. I’m now convinced that the answer to this is a resounding NO–there is no area after which all integral square areas can be constructed using square grid paper. This is because there is no largest un-constructable area (proof below). This opens a new question.

Question 4:
Is there some type of 2-dimensional grid paper which does allow the construction of all square areas?

The 3-dimensional version of this question has been asked previously, and this year in the College Math Journal, Rick Parris of Exeter has “proved that if a cube has all of its vertices in

then the edge length is an integer.”

Dave’s proposition above about determining whether an area 112 (or any other) can be made is very interesting. (BTW, 112 cannot be made.) I don’t have any thoughts at present about how to approach the feasibility of a random area. As a result of my searches, I still suspect (but haven’t proven) that non-perfect square multiples of 3 that aren’t multiples of pre-existing squares seem to be completely absent. This feels like a number theory question … not my area of expertise.

Whether or not you decide to read the following proof for why there are an infinite number of impossible-to-draw square areas using square grids, I think one more very interesting question is now raised.

Question 5:
Like the prime numbers, there is an infinite number of impossible-to-draw square areas. Is there a pattern to these impossible areas? (Remember that the pattern of the primes is one of the great unanswered questions in all of mathematics.)

THE PROOF
My proof does not feel the most elegant to me. But I do like how it proves the infinite nature of these numbers without ever looking at the numbers themselves. It works by showing that there are far more integers than there are ways to arrange them on a square grid, basically establishing that there is simply not enough room for all of the integers forcing some to be impossible. I don’t know the formal mathematics name for this principle, but I think of it as a reverse Pigeonhole Principle. Rather than having more pigeons than holes (guaranteeing duplication), in this case, the number of holes (numbers available to be found) grows faster than the number of pigeons (the areas of squares that can actually be determined on a square grid), guaranteeing that there will always be open holes (areas of squares that cannot be determined on using a square grid).

This exploration and proof far exceeds most (all?) textbooks, but the individual steps require nothing more than the ability to write an equation for an exponential function and find the sum a finite arithmetic sequence. The mathematics used here is clearly within the realm of what high school students CAN do. So will we allow them to explore, discover, and prove mathematics outside our formal curricula? I’m not saying that students should do THIS problem (although they should be encouraged in this direction if interested), but they must be encouraged to do something real to them.

Now on to a proof for why there must be an infinite number of impossible-to-draw square areas on a square grid.

This chart shows all possible areas that can be formed on a square grid. The level 0 squares are the horizontal squares discussed earlier. It is lower left-upper right symmetric (as noted on Dave’s ‘blog), so only the upper triangle is shown.

The percentage of possible numbers appears to be declining and is always less than the possible number of areas. But a scant handful of data points does not always definitively describe a pattern.

Determining the total number of possible areas:
Level 1 has 9 single-digit areas. Level 2 has 90 two-digit areas, and Level 3 has 900 three-digit areas. By this pattern, Level M has

M-digit areas. This is the number of holes that need to be filled by the squares we can find on the square grid.

Determining an upper bound for the number of areas that can be accommodated on a square grid:
Notice that if a horizontally-oriented square has area of Level M, then every tilted square in its column has area AT LEAST of Level M. Also, the last column that contains any Level M areas is column

where floor is the floor function.

. Assuming all of the entries in the data chart up to column

are Level M (another overestimate if

is not an integer), then there are

maximum area values to fill the

Level M area holes. This is an extreme over-estimate as it ignores the fact that this chart also contains all square areas from Level 1 through Level (M-1), and it also contains a few squares which can be determined multiple ways (e.g., area 25 squares).

, accounting in part for the decreasing percentage of found areas noted in the data chart. That is, the number of possible areas grows faster than the number of areas that actually can be created on square grid paper.

While this proof does not say WHICH areas are possible (a great source for further questions and investigation!), it does show that the number of areas of squares impossible to find using a square grid grows without bound. Therefore, there is no largest area possible.