From some earlier posts (here, here, and here), you know I’m rather fond of the Four 4s puzzle.  I’ve invoked it twice in the first month of this school year.

Following are descriptions of how I’m using it first with middle school students  and then a twist I employed for some interested 4th & 5th graders.

I began the Four 4s puzzle with my 8th graders partly as a way to reinforce order of operations after a summer off from math (for most of the students), but primarily to bring home the ideas that mathematics absolutely has room for creativity, and that there are often multiple ways to solve problems.  Last week, the final integers from 0-100 were found by Hawken’s 8th graders:

One of the great by-products of this game is the discussion of what solutions would be considered “better” or “simpler” than others.  Based on suggestions from my students last year, this time around I asked this year’s participants to set their own levels for the math operations. Expectedly, the basic four operations and absolute values were Level 1.  Concatenation (44) and decimals (.4) were deemed Level 2, as were exponents.  I was initially surprised when the students then declared square roots to be Level 3.  Even though I consider them equivalent in complexity to exponents, this group of 8th graders consider the root operation more difficult–a good lesson for me this year.

A few remembered factorials (4!), called them Level 3, and actively used them to access larger numbers.  When the last few numbers were proving difficult, some began researching other math operations.  One discovered the Gamma Function, but the cool surprise was the introduction of primorials–prime factorials–a function I’d never explored before.  There are two primorial definitions; the students chose the one where you multiply all prime numbers less than or equal to the number being “primorialed”.  For example,

was used pretty heavily by one student.

As a final touch, I used red paper to indicate Level 1 answers and gray paper for Level 2 as a way to visually highlight the lowest level, ideal answers.  (My new school’s colors are red and gray.)  I was also pleased with the way many students paid attention to how some numbers were solved and leveraged those techniques to solve or improve other numbers.  As the numbers are all now located, some are still trying to lower the levels–sniping.  I’m still uploading the list of their lowest level findings, but I’m eventually going to have all of the “simplest versions” of the 8th grade Four 4s findings here.

I was asked to start an after-school “Math Club” this year for interested students in our 4th & 5th grades.  Thinking it would be a cool way to stretch some younger students, I decided to play a variation of Four 4s.  Hawken was founded in 1915, so inspired by Integermania‘s variations, we made a new game with the same rules and different digits: 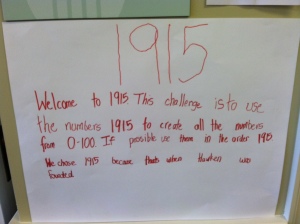 In homage to Hawken’s impending 100th anniversary, we gave special recognition to any solution that used the four digits in 1915 order.

Before starting, I checked the problem’s viability by generating about 90 of the integers from 0-100 before deliberately stopping to be able to tell the students honestly that they had an opportunity to find some numbers I hadn’t–a cool pride point for some to be able to find what their teachers couldn’t.  I also decided not to introduce sniping for this group because I wanted to encourage more creativity and cooperation.

Here is the list of what our students have discovered.  The students have used decimals, two-digit numbers, and square roots, and have even learned factorials.  Monday, I introduced repeated digits to help them go a bit further.

When 18 numbers remained unfound last week, the group decided some of their solutions on a big wall where everyone in the lower school would pass to generate interest in math creativity.  They chose not to post everything they had found in hopes that others would be able to find solutions the group hadn’t discovered.

The numbers written in red are the more valuable “1915” solutions; the gray are other valid solutions.  We also decided that it would be cool to create a “most wanted” set of posters (think Old West) for the numbers who were still “on the loose”.

Within 3 hours of posting these, the number 72 was found by a 3rd grader:

.  Note the orange strip across the 72 above indicating that it had been found.  I’ve also had several families begin to play the game at home with their kids–exactly the kind of engagement I was hoping to stir up.

After being pressed by a few parents and students who didn’t believe all were possible, I spent a few hours exploring–I found all but one.  Here is my list of all of the missing numbers.  Obviously, this isn’t released to the students; it was for my own satisfaction.  But that leaves one big question:

Using only upper-elementary to middle-school comprehensible math functions, how do you make a 74 using only the digits 1, 9, 1, & 5.
(Pride bonus if you can use them in that order!)

Here’s an interesting variation of a typical (MS) problem I found by following the Five Triangles ‘blog: http://fivetriangles.blogspot.com/2013/09/97-no-triangle.html .

(Note:  If you sign up on this or other ‘blogs, you can get lots of problems emailed to you every time they are added.)

I know this question can absolutely be solved without using technology, but when a colleague asked if it was appropriate to use technology here (my school is one-to-one with tablet laptops), I thought it would be cool to share with her the ease and power of Desmos.  You can enter the equations from the problem exactly as given (no need to solve for y), or you can set up a graph in advance for your students and email them a direct link to an already-started problem.

If you follow this link, you can see how I used a slider (a crazy-simple addition on Desmos) to help students discover the missing value of a.

I suggest in this case that playing with this problem graphically would grant insight for many students into the critical role (for this problem) of the intersection point of the two explicitly defined lines.  With or without technology support, you could then lead your students to determine the coordinates of that intersection point and thereby the value of a.

Keeping with my CAS theme, you could determine those coordinates using GeoGebra’s brand new CAS View:

Substituting the now known values of x and y into the last equation in the problem gives the desired value of a.

NOTE:  I could have done the sliders in GeoGebra, too, but I wanted to show off the ease of my two favorite (and free!) online math tools.

Thoughts?  What other ideas or problems could be enhanced by a properly balanced use of technology?

As an extension to this particular problem, I’m now wondering about the area of triangle formed for any value of a.  I haven’t played with it yet, but it looks potentially interesting.  I see both tech and non-tech ways to approach it.