Given a 5-pointed star like the one shown below, what is the sum of the angles in the outer “arms” of the star? 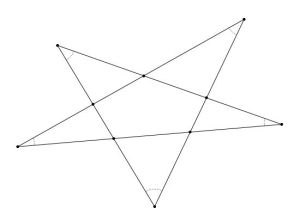 A variation on this problem showed up on a contest our students took last week.  I think there are multiple solution approaches to this, but the exploration and discovery are well worth it.  I offer a generalization at the end.

While not permitted on the contest, my first instinct was to construct the star using dynamic geometry software.  The image below is my result using the TI-Nspire; other softwares would work equally well.

After dragging around the star tips, watching the angles change while the sum didn’t, it was pretty clear that the sum was fixed at 180 degrees.  Nice, but why?

Here’s my no-technology solution from the day of the contest.

I saw the figure as an interior pentagon with exterior triangles off each edge.  Using this, I knew that ALL of the angles in the figure must add to

(for the pentagon) plus

(for the 5 triangles), for a total

degrees.  Then I noticed that there were 10 linear pairs of angles where the triangles met the pentagon, two at each pentagonal vertex.  Subtracting these from the initial sum would leave just the desired star point angles, but unfortunately would subtract the interior pentagonal angles twice, so the pentagon would need to be added back to re-balance.  That left the measure of the start point angles for any orientation to be:

For a total of

I’d love to hear other approaches.

There’s some lovely geometry and arithmetic overlaps in the construction of stars.  That’s perhaps another post for another time.  For now, I’ll extend this to stars with 5 or more points as stars with fewer points aren’t possible with non-degenerate internal polygons like above.

Using the same logic as above, imagine an n-pointed star comprised of an interior n-gon with its edges extended to form n exterior triangles.  My goal now is to find the sum of the n exterior star point angles.

As before, the n triangle angles sum to

degrees and the interior n-gon’s angles sum to

degrees for a total interior angle measure of

linear pairs at the junctures between the n-gon and its exterior triangles.  Subtracting their sum,

degrees, back in once gives the desired sum.

So, for any n-pointed star with

as defined above, the sum of the angles in the star’s exterior arms is

, we get the star point angle sum of 180 degrees from earlier.

This formula is itself not so interesting, but that one can know this general result from manipulating nothing more than the angle properties of triangles, polygons, and linear pairs is nice and completely accessible to geometry students of many levels and ages.

Again, I’d love to hear (and will post/share) any other solution approaches.