A Generic Approach to Arclength in Calculus

Earlier this week, a teacher posted in the College Board’s AP Calculus Community a request for an explanation of computing the arclength of a curve without relying on formulas.

The following video is my proposed answer to that question.  In it, I derive the fundamental arclength relationship before computing the length of

In summary, the length of any differentiable curve can be thought of as

where a and b are the bounds of the curve, the square root is just the local linearity application of the Pythagorean Theorem, and the integral sums the infinitesimal roots over the length of the curve.

To determine the length of any differentiable curve, factor out the form of the differential that matches the independent variable of the curve’s definition.

When graphing functions with multiple local features, I often find myself wanting to explain a portion of the graph’s behavior independent of the rest of the graph.  When I started teaching a couple decades ago, the processor on my TI-81 was slow enough that I could actually watch the pixels light up sequentially.  I could see HOW the graph was formed.  Today, processors obviously are much faster.  I love the problem-solving power that has given my students and me, but I’ve sometimes missed being able to see function graphs as they develop.

Below, I describe the origins of the graph control idea, how the control works, and then provide examples of polynomials with multiple roots, rational functions with multiple intercepts and/or vertical asymptotes, polar functions, parametric collision modeling, and graphing derivatives of given curves.

BACKGROUND:  A colleague and I were planning a rational function unit after school last week wanting to be able to create graphs in pieces so that we could discuss the effect of each local feature.  In the past, we “rigged” calculator images by graphing the functions parametrically and controlling the input values of t.  Clunky and static, but it gave us useful still shots.  Nice enough, but we really wanted something dynamic.  Because we had the use of sliders on our TI-nSpire software, on Geogebra, and on the Desmos calculator, the solution we sought was closer than we suspected.

REALIZATION & WHY IT WORKS: Last week, we discovered that we could use

to create what we wanted.  The argument of the root is 1 for

, a non-real number.  Our insight was that multiplying any function

If I make a slider for parameter a, then

will have output 1 for all

.  That means for any function

with real outputs only,

will have real outputs (and a real graph) for

only.  Aha!  Using a slider and

would allow me to control the appearance of my graph from left to right.

NOTE:  While it’s still developing, I’ve become a big fan of the free online Desmos calculator after a recent presentation at the Global Math Department (join our 45-60 minute online meetings every Tuesday at 9PM ET!).  I use Desmos for all of the following graphs in this post, but obviously any graphing software with slider capabilities would do.

, a 6th degree polynomial whose end behavior is up for 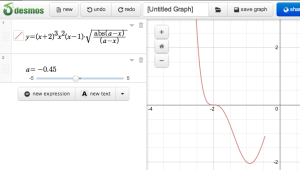 Click here to access the Desmos graph that created the image above.  You can then manipulate the slider to watch the graph wiggle through, then bounce off, and finally pass through the x-axis.

, a 6th degree polynomial whose end behavior is up for

Click here to access the Desmos graph above and control the creation of the rational function’s graph using a slider.

EXAMPLE 3:  I believe students understand polar graphing better when they see curves like the  limacon

moving between its maximum and minimum circles.  Controlling the slider also allows users to see the values of

at which the limacon crosses the pole. Here is the Desmos graph for the graph below.

OK, I know this is an overly simplistic example, but you’ll get the idea of how the controlling slider works on a parametrically-defined function.  The $latex \sqrt{\frac{\left | a-x \right |}{a-x}}$ term only needs to be on one of parametric equations.  Another benefit of the slider approach is the ease with which users can identify the value of t (or time) when each particle reaches the point of intersection or their axes intercepts.  Obviously those values could be algebraically determined in this problem, but that isn’t always true, and this graphical-numeric approach always gives an alternative to algebraic techniques when investigating parametric functions.

ASIDE 1–Notice the ease of the Desmos notation for parametric graphs.  Enter [r,s] where r is the x-component of the parametric function and s is the y-component.  To graph a point, leave r and s as constants.  Easy.

EXAMPLE 5:  When teaching calculus, I always ask my students to sketch graphs of the derivatives of functions given in graphical forms.  I always create these graphs one part at a time.  As an example, this graph shows

and allows you to get its derivative gradually using a slider.

ASIDE 2–It is also very easy to enter derivatives of functions in the Desmos calculator.  Type “d/dx” before the function name or definition, and the derivative is accomplished.  Desmos is not a CAS, so I’m sure the software is computing derivatives numerically.  No matter.  Derivatives are easy to define and use here.

I’m hoping you find this technology tip as useful as I do.

OK, no CAS here, but the power of screencasting allows one to add a voice-over to problems that are difficult to capture in the linear text that predominates Web-based writing.  The following two problems were requests from March 6-7, 2012 on the AP Calculus EDG.  My solutions are screencasts using the ShowMe Whiteboard app on my iPad.  Thanks to my former student (now technology consultant) Beth Holland for the lead to that great app.

As an aside, colleague John Burk (@occam98) pointed me to a cool article, Volumes of Revolution & 3D Modeling, that quite rightly identifies the most challenging part about volumes of revolutions for students:  visualization.  This is another reason why we need to make greater use of screencasting or other technologies to get past the walls of words.

I find that many students (and some teachers) have difficulty sorting out the different forms of arclength.  My screencast describes very briefly why I believe students should work from the single arclength formula,