In my previous post, I explored what happened when you converted a polynomial from its variable form into a base-x numerical form.  That is, what are the computational implications when polynomial

is represented by the base-x number

, where the parentheses are used to hold the base-x digit, -11, for the second power of x?

So far, I’ve explored only the Natural number equivalents of base-x numbers.  In this post, I explore what happens when you allow division to extend base-x numbers into their Rational number counterparts.

Numbers can have decimals, so what’s the equivalence for base-x numbers?  For starters, I considered trying to get a “decimal” form of

.  There are too few “places”, so some form of decimals are required.  Employing division as described in my previous post somewhat like you would to determine the rational number decimals of

Remember, the places are powers of x, so the decimal portion of

, and it is equivalent to

This can be seen as a geometric series with first term

which is equivalent to

, confirming the division computation.  Of course, as a geometric series, this is true only so long as

I thought this was pretty cool, and it led to lots of other cool series.  For example, if

I found it quite interesting to have a “polynomial” defined with a rational expression.

, the series is obviously divergent,

which is properly equivalent to

as defined by the convergence domain and the graphical behavior of

just to the left of 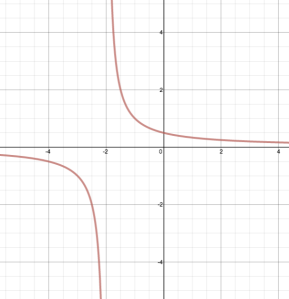 I did find it curious, though, that

is a solid approximation for

.  What a curious, asymmetrical approximator.

Some quick calculus gives the Maclaurin series for

, a geometric series with first term

.  Interestingly, the ratio emerging from the Maclaurin series is the reciprocal of the ratio from the “rational polynomial” resulting from the base-x division above.

As a geometric series, the interval of convergence is

.  Excluding endpoint results, the Maclaurin interval is the complete Real number complement to the base-x series.  For the endpoints,

did for the left side of the vertical asymptote in the base-x series.  Again,

Because any polynomial divided by another is absolutely equivalent to a base-x rational number and thereby a base-x decimal number, it will always be possible to create a “rational polynomial” using powers of

for non-zero denominators.  But, the decimal patterns of rational base-x numbers don’t apply in the same way as for Natural number bases.  Where

is guaranteed to have a repeating decimal pattern, the decimal form of

clearly will not repeat.  I’ve not explored the full potential of this, but it seems like another interesting field.

Once number bases are understood, I’d argue that using base-x multiplication might be, and base-x division definitely is, a cleaner way to compute products and quotients, respectively, for polynomials.

The base-x division algorithm clearly is accessible to Algebra II students, and even opens the doors to studying series approximations to functions long before calculus.

Is there a convenient way to use base-x numbers to represent horizontal translations as cleanly as polynomials?  How difficult would it be to work with a base-

As a calculus extension, what would happen if you tried employing division of non-polynomials by replacing them with their Taylor series equivalents?  I’ve played a little with proving some trig identities using base-x polynomials from the Maclaurin series for sine and cosine.

What would happen if you tried to compute repeated fractions in base-x?

It’s an open question from my perspective when decimal patterns might terminate or repeat when evaluating base-x rational numbers.

I’d love to see someone out there give some of these questions a run!

About a month ago, I was working with our 5th grade math teacher to develop some extension activities for some students in an unleveled class.  The class was exploring place value, and I suggested that some might be ready to explore what happens when you allow the number base to be something other than 10.  A few students had some fun learning to use their basic four algorithms in other number bases, but I made an even deeper connection.

), I realized that if the 10 was an x, I’d have a polynomial.  I’d recognized this before, but this time I wondered what would happen if I applied basic math algorithms to polynomials if I wrote them in a condensed numerical form, not their standard expanded form.  That is, could I do basic algebra on

if I thought of it as

Following are some examples I played with to convince myself how my new notation would work.  I’m not convinced that this will ever lead to anything, but following my “what ifs” all the way to infinite series was a blast.  Read on!

If I wanted to add

, I could think of it as

and add the numbers “normally” to get

.  Notice that each power of x identifies a “place value” for its characteristic coefficient.

If I wanted to add

to itself, I had to adapt my notation a touch.  The “units digit” is a negative number, but since the number base, x, is unknown (or variable), I ended up saying

.  The parentheses are used to contain multiple characters into a single place value.  Then,

The last example also showed me that simple multiplication would work.  Adding

to itself is equivalent to multiplying

.  That’s easy!  Arguably, this might be even easier that doubling a number when the number base is known.  Without interactions between the coefficients of different place values, just double each digit to get

.  While simple, I’ll solve this one by stacking.

.  As with base-10 numbers, the use of 0 is needed to hold place values exactly as I needed a 0 to hold the

. Again, this could easily be accomplished without the number base conversion, but how much more can we push these boundaries?

.  Stacking again and using a modification of the multiply-and-carry algorithm I learned in grade school, I got 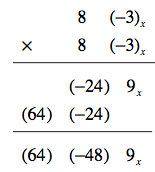 and this is equivalent to

All other forms of polynomial multiplication work just fine, too.

From one perspective, all of this shifting to a variable number base could be seen as completely unnecessary.  We already have acceptably working algorithms for addition, subtraction, and multiplication.  But then, I really like how this approach completes the connection between numerical and polynomial arithmetic.  The rules of math don’t change just because you introduce variables.  For some, I’m convinced this might make a big difference in understanding.

I also like how easily this extends polynomial by polynomial multiplication far beyond the bland monomial and binomial products that proliferate in virtually all modern textbooks.  Also banished here is any need at all for banal FOIL techniques.

. Remembering that there is no place value carrying possible, I had to be a little careful when setting up my computation. Focusing only on the lead digits, 1 “goes into” 1 one time.  Multiplying the partial quotient by the divisor, writing the result below and subtracting gives

Then, 1 “goes into” -2 negative two times.  Multiplying and subtracting gives a remainder of 0.

is a factor of

, and the other factor is the quotient,

Perhaps this could be used as an alternative to other polynomial division algorithms.  It is somewhat similar to the synthetic division technique, without its  significant limitations:  It is not limited to linear divisors with lead coefficients of one.

From all I’ve been able to tell, converting polynomials to their base-x number equivalents enables you to perform all of the same arithmetic computations.  For division in particular, it seems this method might even be a bit easier.

In my next post, I push the exploration of these base-x numbers into infinite series.