Last week, some colleagues and I were pondering the difficulties many middle school students have solving ratio and proportion problems.  Here are a few thoughts we developed to address this and what we think might be an uncommon graphical extension (for most) as a different way to solve.

For context, consider the equation

The default procedure most textbooks and students employ is cross-multiplication.   Using this, a student would get

In every math class I teach at every grade level, my mantra is to memorize as little as possible and to use what you know as broadly as possible.  To avoid learning unnecessary, isolated procedures (like cross-multiplication), I propose “fraction-clearing”–multiplying both sides of an equation by a common denominator—as a universal technique in any equation involving fractions.  As students’ mathematical and symbolic sophistication grows, fraction-clearing may occasionally yield to other techniques, but it is a solid, widely-applicable approach for developing algebraic thinking.

Notice that the middle line is precisely the result of cross-multiplication.  Fraction-clearing is the procedure behind cross-multiplication and explains exactly why it works:  You have an equation and apply the same operation (in our case, multiplying by 24) to both sides.

As an aside, I’d help students see that multiplying by any common denominator would do the trick (for our example, 12, 24, 36, 48, … all work), but the least common denominator (12) produces the smallest products in line 2, potentially simplifying any remaining algebra.  Since many approaches work, I believe students should be free to use ANY common denominator they want.   Eventually, they’ll convince themselves that the LCD is just more efficient, but there’s absolutely no need to demand that of students from the outset.

Remember that every equation compares two expressions that have the same measure, size, value, whatever.  But fractions with differing denominators (like our given equation) are difficult to compare.  Rewrite the expressions with the same “units” (denominators) to simplify comparisons.

Fourths and sixths can both be rewritten in twelfths.  Then, since the two different expressions of twelfths are equivalent, their numerators must be equivalent, leading to our results from above.

A fundamental mathematics concept (for me) is the Rule of 4 from the calculus reform movement of the 1990s.  That is, mathematical ideas can be represented numerically, algebraically, graphically, and verbally.  [I’d extend this to a Rule of 5 to include computer/CAS representations, but that’s another post.]  If you have difficulty understanding an idea in one representation, try translating it into a different representation and you might gain additional insights, or even a solution.  At a minimum, the act of translating the idea deepens your understanding.

One problem many students have with ratios is that teachers almost exclusively teach them as an algebraic technique–just as I have done in the first three methods above.  In my conversation this week, I finally recognized this weakness and wondered how I could solve ratios using one of the missing Rules: graphically.  Since equivalent fractions could be seen as different representations of the slope of a line through the origin, I had my answer.

Students learning ratios and proportions may not seen slope yet and may or may not have seen an xy-coordinate grid, so I’d avoid initial use of any formal terminology.  I labeled my vertical axis “Top,” and the horizontal “Bottom”.  More formal names are fine, but unnecessary.  While I suspect most students might think “top” makes more sense for a vertical axis and “bottom” for the horizontal, it really doesn’t matter which axis receives which label.

In the purely numeric fraction in our given problem,

, “3” is on top, and “4” is on the bottom.  Put a point at the place where these two values meet.  Finally draw a line connecting your point and the origin.

The other fraction has a “6” in the denominator.  Locate 6 on the “bottom axis”, trace to the line, and from there over to the “top axis” to find the top value of 4.5. 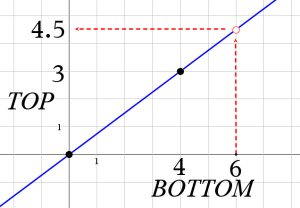 Admittedly, the 4.5 solution would have been a rough guess without the earlier solutions, but the graphical method would have given me a spectacular estimate.  If the graph grid was scaled by 0.5s instead of by 1s and the line was drawn very carefully, this graph could have given an exact answer.  In general, solutions with integer-valued unknowns should solve exactly, but very solid approximations would always result.

Even before algebraic representations of lines are introduced, students can leverage the essence of that concept to answer proportion problems.  Serendipitously, the graphical approach also sets the stage for later discussions of the coordinate plane, slope, and linear functions.  I could also see using this approach as the cornerstone of future class conversations and discoveries leading to those generalizations.

I suspect that students who struggle with mathematical notation might find greater understanding with the graphical/visual approach.  Eventually, symbolic manipulation skills will be required, but there is no need for any teacher to expect early algebra learners to be instant masters of abstract notation.