I didn’t encounter the Quadrilateral Midpoint Theorem (QMT) until I had been teaching a few years.  Following is a minor variation on my approach to the QMT this year plus a fun way I leveraged the result to introduce similarity.

In case you haven’t heard of it, the surprisingly lovely QMT says that if you connect, in order, the midpoints of the four sides of a quadrilateral–any quadrilateral–even if the quadrilateral is concave or if its sides cross–the resulting figure will always be a parallelogram.

This is a cool and easy property to explore on any dynamic geometry software package (GeoGebra, TI-Nspire, Cabri, …).

SKETCH OF THE TRADITIONAL PROOF:  The proof is often established through triangle similarity:  Whenever you connect the midpoints of two sides of a triangle, the resulting segment will be parallel to and half the length of the triangle’s third side.  Draw either diagonal in the quadrilateral to create two triangles.  Connecting the midpoints of the other two sides of each triangle creates two congruent parallel sides, so the quadrilateral connecting all four midpoints must be a parallelogram.

NEW APPROACH THIS YEAR:  I hadn’t yet led my class into similarity, but having just introduced coordinate proofs, I tried an approach I’d never used before.  I assigned a coordinate proof of the QMT.  I knew the traditional approach existed, but I wanted them to practice their new technique.  From a lab in December, they already knew the result of the QMT, but they hadn’t proved it.

PART I:  Let quadrilateral ABCD be defined by the points , A=(a,b), B=(c,d), C=(e,f),  and D=(g,h).  There are several ways to prove that the midpoints of ABCD are the vertices of a parallelogram.  Provide one such coordinate proof.

All groups quickly established the midpoints of the four sides:

.  From there, my students took three approaches to the final proof, each relying on a different sufficiency condition for parallelograms.

The most common was to show that opposite sides were parallel.

, proving the other opposite side pair also was parallel.  With both pairs of opposite sides parallel, the midpoint quadrilateral was necessarily a parallelogram.

I had two groups leverage the fact that the diagonals of parallelograms were mutually bisecting.

One student even proved that opposite sides were congruent.

While it was not readily available for my students this year, I can imagine allowing CAS for these manipulations if I use this activity in the future.

EXTENDING THE QMT TO SIMILARITY:  For the next stage, I asked my students to explains what happens when the QMT is applied to degenerate quadrilaterals.

I encourage you to construct this using a dynamic geometry package, but here’s the result.

CONCLUSION:  I think it critical to teach in a way that draws connections between ideas and units. This exercise made a lovely transition from quadrilaterals through coordinate proofs to the triangle midpoint theorem.

Quadrilateral surprise … or not?

The first time I recall encountering this problem was about 10-15 years ago when I was reading David Wells’ Curious and Interesting Geometry.  Not having taught geometry for several years, I’d forgotten about it until I encountered it again last week in Paul Lockhart’s Measurement.

My statement of the problem:

Draw several different quadrilaterals in your investigation.  So long as the sides don’t overlap, nothing else matters.  The pattern will emerge.  I love the stunning and unexpected emergence of order.

Don’t read any further until you’ve played with this for yourself.  The joy of mathematical discovery is worth it!  Above all, give yourself and your students lots of time to explore.  Don’t be too quick to offer suggestions.

I suggest using TI-nSpire, Geogebra, Geometer’s Sketchpad, or some other dynamic geometry software to model this.  Using my TI, I was able to quickly explore an entire spectrum of results.  Following are two representative images.

No matter what type of non-overlapping quadrilateral you draw, a parallelogram always seems to emerge.  I thought a while through various approaches to discover an elegant way to prove this, and in the process discovered the area solution.  Find your own proof before reading further.

FINAL SOLUTION ALERT!  DON’T READ FURTHER UNTIL YOU HAVE YOUR OWN SOLUTION.

My great insight happened when I imagined a diagonal drawn in a quadrilateral, splitting the original into two triangles.  That insight reminded me of a cool triangle property:  In any triangle, if you connect the midpoints of two sides, the resulting segment is parallel to and half the length of the third side.

In any quadrilateral ABCD, let W, X, Y, and Z be the respective midpoints of segments AB, BC, CD, and AD.  Draw diagonal AC of ABCD, creating triangles ABC and ACD.

By the triangle property noted above, segments WX and ZY are each parallel to and half the length of WXYZ.  That is sufficient to establish that WXYZ is a parallelogram.  QED.

Two triangles sharing the same base doesn’t seem like a condition imposing lots of order, but that is just enough to lay the inevitable conditions for creating a highly structured parallelogram.  The emergence of a highly ordered parallelogram from a seemingly random quadrilateral was inevitable!  As one of my students said, “Math works.”

To establish the area condition, I offer a proof without words. 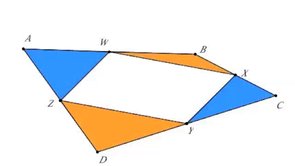 I’d love to hear how any of you approach the problem.  I’ll post any responses.