I’ve learned so much math and strategy by listening carefully to students who haven’t yet “learned” that some things are impossible.

If you’ve read many of my posts, you know I’m a major proponent of the power of CAS for teaching and learning.  Following is an unexpected solution to a problem I asked on a quiz.  It is also one example of why I believe we should be giving our math and science students access to CAS technology.

I’m teaching (for the first time) a senior Calculus-Statistics class at my school this year.  It’s been over a decade since I’ve taught a stats course, so I was pretty excited with this assignment.

This is the second year of the course, all of the students have TI-Nspire CAS calculators, and my high school is in its rollout year of a 1:1 Macbook program.  Because of the laptops, all students now have Nspire CAS software.

Using the Nspires, it is possible to avoid all use of normal distribution tables.  For the first time in my career as a student and teacher of statistics, I haven’t spent a single moment on the statistical tables in the back of the book, and I think my students are actually stronger and understand better for it.  Basically, there are two calculator/computer commands we are using for working with normal distributions:  normCdf(a,b,m,s) and invNorm(c,m,s).

This software is so much faster, more powerful, and more flexible than the tabular computations that comprised all of my prior teaching and learning of statistics.  While my students still have a long way to go in their learning, I think their performance is clear evidence that it is time for normal distribution tables to follow into extinction the tables for roots, logarithms, and trig values.

The Quiz Question (Lifted from a stats textbook from which I used to teach at a local community college):

As reported in Runner’s World magazine, the times of the finishers in the New York City 10K run are normally distributed with a mean of 61 minutes and a standard deviation of 9 minutes. … If my time was at the 70th percentile, how fast did I run?

OK, it’s not a deep question at all, but I like what my student did with it.

Given the area under the curve, my students should have invoked the TI-Nspire’s inverse normal command with the area, mean, and standard deviation for a quick solution.  This image of K’s response is a quick example of what I expected.

What I got from one student:

I was very surprised when I read T’s response.

The first thing to note here is that T obviously made a mistake in his computations which led to his wrong answer–but his insight was grand.  Rather than memorizing and using the two computer commands, T recognized that his CAS might let him get away with a single command.  The heart of his syntax says normCdf(x,

,61,9)=0.7 which means there is some region bounded on the left by some unknown x and on the right by

I think T’s insight is great for several reasons:

In the early 1990s when I was using TI-89s to teach a statistics course at a local community college, I routinely used a solve command on CDF commands with great success, so I naturally tried solve(normCdf(x,

,61,9)=0.7,x) on my Nspire prior to starting this unit.  I was disappointed that my TI-89 capability from a decade earlier no longer worked, and I was too “trained” to consider nSolve (numeric solve) when solve had already failed.  This is a major reason why I believe all teachers should encourage all of their students to be creative and to search for solutions that make sense to them.

I’ll try to offer in a future post some more technical explorations I’ve done on this technique inspired by T’s approach.

A fellow Atlanta-area teacher and TI technology buff, Dennis Wilson, started talking to me several months ago about the power of using a locus to describe mathematical relationships. My own exposure to loci had been admittedly limited until that point. When I heard “locus”, my mind immediately went to geometry and the conic sections which I had “learned” by their locus definitions, but I really don’t think I had understood fully how useful a locus was.

The example I give below shows how to construct the inverse to any function using TI-Nspire software. The presentation uses computer software, but easily can be replicated on handheld Nspires. What I particularly like about this approach is that it gives a very strong visual representation of what had largely been a purely algebraic maneuver –switch x & y, and solve for y (if possible). I had always understood inverses as transformations in which the input and output variables reversed roles and knew that was equivalent to reflecting a given curve over y=x, but this approach significantly enhanced my understanding of locus and definitely improved my visual conception of the construction of an inverse.

What I’ve found most amazing is that this approach handles inverses of any curve you can graph in the function menu of the Nspire.

Finding graphs of inverses of non-functions has always been a challenging problem for computers. For example, to find the graph of the inverse of the ellipse

using a function graph on an Nspire CAS, you could use the zeros command. Typically, this provides the entire graph, but this inverse approach results in only half of the ellipse and the corresponding half of its inverse. Because the zeros command has limitations for higher order polynomials, I hoped the approach would work for parametrically defined curves. The image below shows that the Geometry Trace still gives the outline of the curve (probably enough for most), but the locus doesn’t work. (I suspect this is because I’m creating the inverse from _dependent_ x- and y-coordinates.) 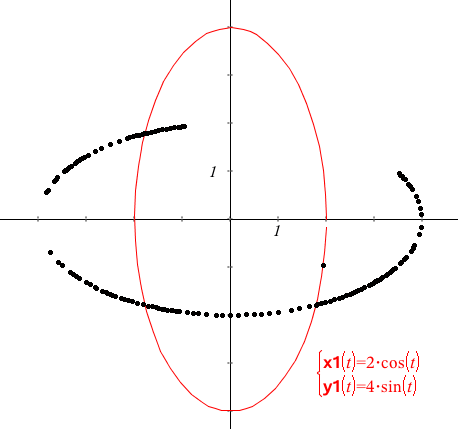 The same restrictions (probably for the same dependence-independence reasons) apply to polar curves, but at least you can trace the inverse.

I need to think more, but for now, thank you, Dennis, for opening a door in my mind that should have been opened long ago.