But that’s not supposed to happen so cleanly in polar coordinates.  AND, the equation forms don’t suggest at all that a translation is happening.  So is it real or is it a graphical illusion?

I proved in my earlier post that the effect was real.  In my approach, I dealt with the different periods of the two equations and converted into parametric equations to establish the proof.  Because I was working in parametrics, I had to solve two different identities to establish the individual equalities of the parametric version of the Cartesian x- and y-coordinates.

As a challenge to my precalculus students this year, I pitched the problem to see what they could discover. What follows is a solution from about a month ago by one of my juniors, S.  I paraphrase her solution, but the basic gist is that S managed her proof while avoiding the differing periods and parametric equations I had employed, and she did so by leveraging the power of CAS.  The result was that S’s solution was briefer and far more elegant than mine, in my opinion.

Multiply both sides of

by r and translate to Cartesian.

At this point, S employed some CAS power.

[Full disclosure: That final CAS step is actually mine, but it dovetails so nicely with S’s brilliant approach. I am always delightfully surprised when my students return using a tool (technological or mental) I have been promoting but hadn’t seen to apply in a particular situation.]

S had used her CAS to accomplish the translation in a more convenient coordinate system before moving the equation back into polar.

In an attachment (included below), S proved an identity she had never seen,

, which she now applied to her CAS result.

is the image of

Obviously, this could have been accomplished using lots of by-hand manipulations.  But, in my opinion, that would have been a horrible, potentially error-prone waste of time for a problem that wasn’t concerned at all about whether one knew some Algebra I arithmetic skills.  Great job, S!

S’s proof of her identity, 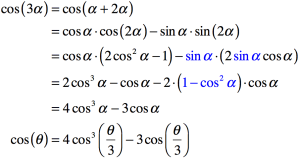 One response to “A Student’s Powerful Polar Exploration”