Here’s a short post to share two great tools for students to learn algebra–long before any formal algebra course and without seeming like you’re even learning algebra.

ACTIVITY ONE:  The first is a phenomenal recent set of posts on Imbalance Problems (here and here) from Paul Salomon.  If you’re on Twitter, interested in math or math education, and haven’t already, you should definitely follow him  (@lostinrecursion).

Paul is (or was) hosting an Imbalance Problem competition (mentioned at the end of his first post on  imbalance problems), but the following image from his post gives the general idea. 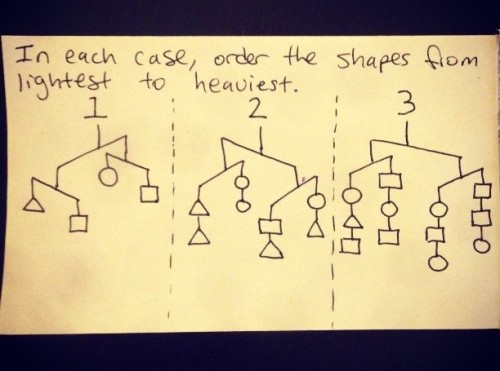 Can you figure these out?  Better yet, can you write some of your own?  Can you encourage your students (or kids) to create some?  The process of thinking about the values of the unknown measures of the circles, squares, and triangles necessary to create these puzzles lies at the very heart of the concept of unknown variables that is so critical to algebraic reasoning.  Best of all, this feels like a game, and puzzle solvers don’t even realize they’re learning algebra.

ACTIVITY TWO:  Several months ago, a Westminster alumnus (Thanks, Phillip!) suggested an iPad app that my 3rd grade daughter instantly fell in love with–Dragon Box.  The app is available for $5.99 on both iOS and Android platforms. 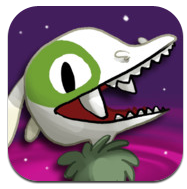 Jonathan H. Liu (@jonathanhliu) wrote such a great overview of the play on DragonBox for Wired.  Rather than trying to imitate his post, I recommend you read his review:  DragonBox: Algebra Beats Angry Birds.

The play of the game is great for teaching algebraic skills, again without ever seeming like it’s teaching as much as it is.  As a parent, I was THRILLED to see an educational game pull my daughter in so effectively and completely.  A high point came when I was driving carpool last week and my daughter recommended to a friend who was wondering what app would be fun to play for the ride, “Try DragonBox.  It’s fun!”

As a math teacher, I certainly can appreciate the game’s end-of-level challenges to get the box alone (solve for a variable) in the right number of moves (efficiency) using the right number of cards (also efficiency).  Still, there were a few times when I noted that a particular scenario could have been solved using a different sequence of equally-efficient moves that were not appropriately acknowledged as such by the software.  My teacher side wasn’t particularly pleased with the only-one-way-earns-top-recognition approach of the app, especially when other alternatives are equally valid.  Too many times, I fear students are faced with similar scenarios in their math classes.  Efficiency and elegance are certainly valuable skills in mathematics, but I think we too often try to impose rigor on young learners long before they have achieved basic understanding.

My grousing aside, my daughter and her friends weren’t bothered at all by the rare times where I had identified alternatives–I don’t think they even noticed.  Back to my point about too much emphasis on “the ‘right’ way” too early, I decided not to mention it to them.  As Mark Twain noted, I decided not “to let schooling get in the way of [their] education.”

CONCLUSION:  I hope you get a kick out of Paul’s imbalance problems (no matter what your age) and DragonBox if you have some younger kids around.  As always, make learning fun and not obvious–your charges will learn in spite of themselves!