TI finally converted its Nspire calculators to the iPad platform and through this weekend only in celebration of 25 years of Teachers Teaching with Technology, they’re offering both of their Nspire apps at $25 off their usual $29.99, or $4.99 each.  This is a GREAT deal, especially considering everything the Nspire can do!  Clicking on either of the images below will take you to a description page for that app. 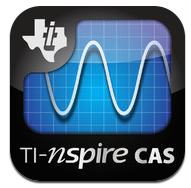 In my opinion, if you’re going to get one of these, I’d grab the CAS version.  It does EVERYTHING the non-CAS version does plus great CAS tools.  Why pay the same money for the non-CAS and get less?  You aren’t required to use the CAS tools, but I’d rather have a tool and not need it than the other way around.  If you read my ‘blog, though, you know I strongly advocate for CAS use for anyone exploring mathematics.

Now, on to my brief review of the new apps.

MY REVIEW:  From my experimentations the last few days, this app appears to do EVERYTHING the corresponding handheld calculators can do.  I wouldn’t be surprised if there are a few things the computer version can do that the app can’t, but I haven’t been able to find it yet.  In a few places, I actually like the iPad app better than either the handheld or computer versions.  Here are a few. 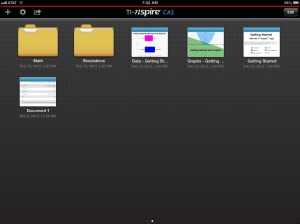 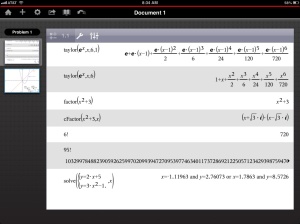 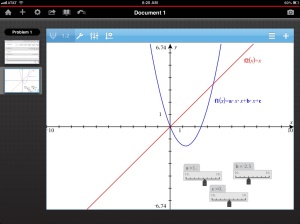 For now, I see two drawbacks, but I can easily deal with both given the other advantages.

As I said, these are pretty minor flaws.

CONCLUSION:  It looks like strong, legitimate math middle and high school math-specific apps are finally entering the iPad market, and I know of others in development.  TI’s Nspire apps are spectacular (and are even better if you can score one for the current deeply discounted price).