This article takes my idea from yesterday’s post about using

to control the appearance of a graph and extends it in two ways.

, I encourage my students to use both its local behavior (cubic root at

, and linear root at

). To start graphing, I suggest students plot points on the x-intercepts and then sketch arrows to indicate the end behavior.  In the past, this was something we did on paper, but couldn’t get technology to replicate it live–until this idea.

In class last week, I used a minor extension of yesterday’s idea to control a graph’s appearance from the left and right simultaneously.  Yesterday’s post suggested  multiplying  by

to show the graph of a function from the left for

.  Creating a second graph multiplied by

gives a graph of your function from the right for

.  The following images show the polynomial’s graph developing in a few stages.  You can access the Desmos file here.

First graph the end behavior (pull the a and b sliders in a bit to see just the ends of the graph) and plot points at the x-intercepts.

From here, you could graph left-to-right or right-to-left.  I’ll come in from the right to show the new right side controller. The root at

is linear, so decreasing the b slider to just below 1 shows this.

Continuing from the right, the next root is a bounce at

, as shown by decreasing the b slider below 0.  Notice that this forces a relative minimum for some 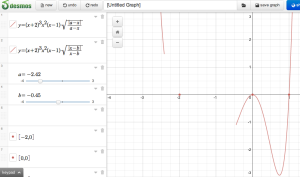 by increasing the a slider above 2.

All that remains is to connect the two sides of the graph, creating one more relative minimum in

The same level of presentation control can be had for any function’s graph.

I hadn’t thought to extend this any further until my colleague asked if a graph could be controlled up and down instead of left and right.  My guess is that the idea hadn’t occurred to me because I typically think about controlling a function through its domain.  Even so, a couple minor adjustments accomplished it.  Click here to see a vertical control of the graph of

from above and below. 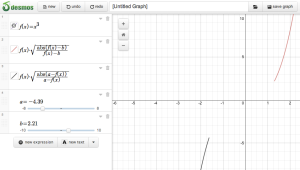 This entry was posted in Technology and tagged Desmos, polynomial, slider, technology. Bookmark the permalink.