Trig Identities with a Purpose

Yesterday, I was thinking about some changes I could introduce to a unit on polar functions.  Realizing that almost all of the polar functions traditionally explored in precalculus courses have graphs that are complete over the interval

, I wondered if there were any interesting curves that took more than

My first attempt was 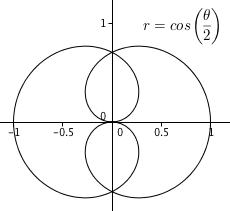 Trying for more of the same, I graphed

guessing (without really thinking about it) that I’d get more loops.  I didn’t get what I expected at all. 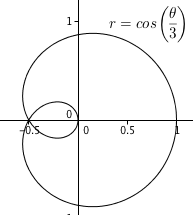 Wow!  That looks exactly like the image of a standard limaçon with a loop under a translation left of 0.5 units. 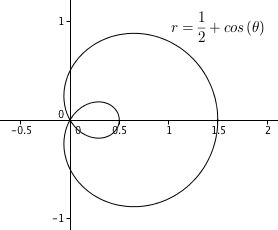 completes its graph in

As you know, in mathematics, it is never enough to claim things look the same; proof is required.  The acute challenge in this case is that two polar curves (based on angle rotations) appear to be separated by a horizontal translation (a rectangular displacement).  I’m not aware of any clean, general way to apply a rectangular transformation to a polar graph or a rotational transformation to a Cartesian graph.  But what I can do is rewrite the polar equations into a parametric form and translate from there.

a unit to the right makes the parametric equations

This should align with the standard limaçon,

, whose parametric equations for

The only problem that remains for comparing

is that their domains are different, but a parameter shift can handle that.

Now that the translation has been applied and both functions operate over the same domain, the two functions must be identical iff

Before blindly manipulating the equations, I take some time to develop some strategy.  I notice that the

.  It is generally easier to work with a single type of angle, so my strategy is going to be to turn everything into trig functions of double angles of the form

Proving that the x expressions are equivalent.  Now for the ys

Therefore the graph of

is exactly the graph of

If there are any students reading this, know that it took a few iterations to come up with the versions of the identities proved above.  Remember that published mathematics is almost always cleaner and more concise than the effort it took to create it.  One of the early steps I took used the substitution

to clean up the appearance of the algebra.  In the final proof, I decided that the 2 extra lines of proof to substitute in and then back out were not needed.  I also meandered down a couple unnecessarily long paths that I was able to trim in the proof I presented above.

Despite these changes, my proof still feels cumbersome and inelegant to me.  From one perspective–Who cares?  I proved what I set out to prove.  On the other hand, I’d love to know if someone has a more elegant way to establish this connection.  There is always room to learn more.  Commentary welcome.

In the end, it’s nice to know these two polar curves are identical.  It pays to keep one’s eyes eternally open for unexpected connections!

2 responses to “Trig Identities with a Purpose”