The importance of a definition

Who cares, some may ask?  From one perspective, everyone is perfectly free to use either definition, but I agree with the contributor who argues that part of the discussion ought to be about what makes a definition in mathematics.  I agree completely because once definitions are accepted–especially in mathematics–they absolutely drive and constrain any and all logical conclusions one logically is able to reach.

The classification question has been discussed by Zalman Usiskin and others, but I’ll attempt a portion of my own micro-version around trapezoid classifications here.

What is a trapezoid?

First, pure trapezoids (those that can’t be called anything more specific under either definition) have precious few properties.  With nothing guaranteed about the non-parallel or congruent sides, about all you can claim is its area formula:

are the parallel bases and ht is the height.  Interestingly, this same area formula also applies (with acknowledgement that

) to parallelograms, rhombi, rectangles, and squares, a “coincidence” ignored by proponents of the exclusive definition.

On the other hand, using an inclusive definition of trapezoids (at least one pair of parallel sides) creates the far more consistent relationship structure shown below.  (Credit due to my teaching of a UCSMP Geometry course 20 years ago.)  The more general names are toward the top of the chart and the more specific shapes are at the bottom.

So why do I care if the benefits for trapezoids are the same under either definition?  The answer lies in the properties of the shapes. 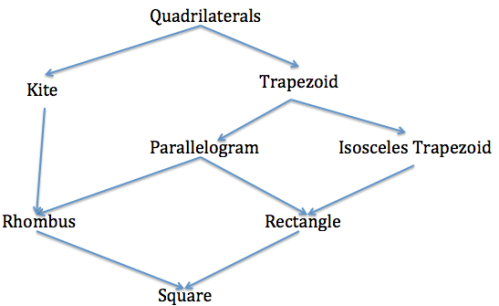 Under the inclusive quadrilateral map shown above, as soon as a more general shape is identified with a particular property, every more specific subcategory below it also has the same property.

As a first example, knowing that the area of a trapezoid is

automatically grants the same property to isosceles trapezoids and the other four quadrilaterals noted earlier.

Which quadrilaterals have perpendicular diagonals?  I know that happens first in a kite, and therefore rhombi and squares gain the property for “free”.

Once you have one set of parallel sides (a trapezoid), what else can you add to such a quadrilateral to make it more specific?  Assuming the inclusive definition, making the other pair of sides parallel, too, makes it a parallelogram where the base angles become supplementary.  If I chose instead to make the base angles congruent, the shape would be an isosceles trapezoid.  Interestingly, both additions (while seemingly independent) force the previously non-parallel sides to congruence.  But you gain something more.

By using more inclusive definitions in mathematics, I gain far richer and interconnected ways of understanding relationships–something that certainly helps my own problem-solving and mathematical understanding.  Even better, brain research suggests that helping students see more connections between ideas reinforces understanding and recall, helping my students.

And what do I lose by eschewing the exclusive definition of trapezoids.  Nothing.

So why to others continue to adhere to to more exclusive definitions?  Because your textbooks say so or because “that’s the way I learned it” seem pretty lame to me.  Give me something practical and I might reconsider, but with nothing in sight to gain from an exclusive definition and connections, insight, understanding, and recall all enhanced by the inclusive definition, I think I’ve found the better place for my students.

This entry was posted in Lessons, Pedagogy and tagged connections, definition, geometry. Bookmark the permalink.